In his work for Habitat for Humanity, Todd J. Fox ’98 helps affiliates across the country to increase access to decent, affordable housing.

Bike rides are common for Todd J. Fox and his wife, Erin. They often pedal about the Williamsport area, enjoying the exercise and savoring the fresh air. But one summertime excursion a few weeks before their September 2021 nuptials proved special. This ride had a specific destination – a part of Fox’s past that foretold his future.

The pair navigated from the Susquehanna River Walk to Maynard Street and turned left at the black macadam road colored with blue paw prints, denoting Pennsylvania College of Technology’s main campus. They breezed past the college’s entrance sign and about 50 yards later slowed to a stop along the left berm. Fox directed Erin’s attention away from the collection of water fountains enhancing the gateway to one of countless commemorative red bricks adjacent to the road and baking in the afternoon sun.

The faded black lettering paid tribute to Fox and the Alumni Citizenship/Humanitarian Award the college bestowed on him in 2008 for distinguished community service. At that time, Fox was executive director of Greater Lycoming Habitat for Humanity.

“I had to show her. Erin is from Illinois and lived in State College. She had never seen the campus,” Fox said. 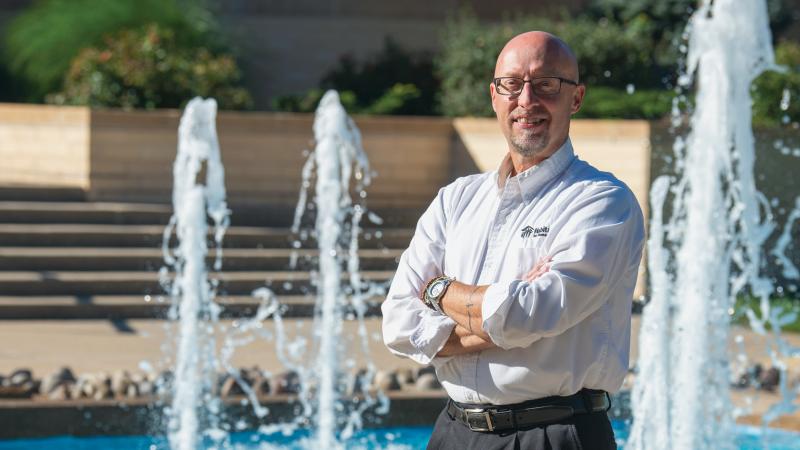 Todd J. Fox ’98 is grateful for the opportunity to impact others through his work with Habitat for Humanity International.

Erin was struck by the beauty of Penn College but not surprised by the award recognition noted on the brick. It reflects Fox’s profound commitment to community that he’s extended far beyond the borders of northcentral Pennsylvania since receiving the alumni accolade. The 1998 graduate is an organizational development consultant for the capacity building division of Habitat for Humanity International, the global nonprofit organization that helps families obtain access to new or improved housing.

“I think in life that we need to be able to think less of ourselves and more about impacting another person. If I can be a positive influence on someone and be part of a cause that has an impact in their life, then I want to be part of that,” Fox said.

The capacity building division is responsible for allocating about $10 million annually in federal grants to some of Habitat’s 1,100 domestic affiliates, chosen through an application process. Fox is one of three organizational development consultants who assist affiliates that have been awarded funding to maximize growth potential.

The aid often includes nonprofit leadership coaching, fundraising support, and relationship facilitation between the local Habitat office and community stakeholders. Fox is based in Williamsport but is responsible for providing such services to affiliates throughout the Eastern Seaboard as well as in Idaho, Wyoming and California. 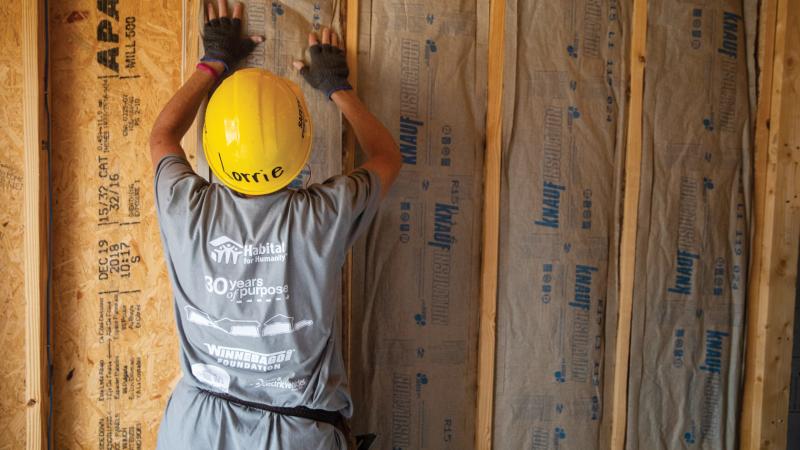 “It’s a very powerful movement what we do, seeing the impact of a family’s life changing,” Fox said in explaining why he left a successful and comfortable career in banking about 14 years ago to devote his professional life to families seeking a “hand up rather than a handout.”

Since its 1976 founding in rural Georgia, Habitat for Humanity has helped approximately 35 million people in all 50 states and 70-plus countries obtain safe and affordable housing. The renowned Christian organization relies on supporters and volunteers from all backgrounds and faiths to fulfill its vision of a world where everyone has a decent place to live.

The typical process requires families to complete an application with their local Habitat organization for housing possibilities. A local selection committee picks applicants based on level of need, financial history, willingness to assist in the building process and ability to repay an affordable mortgage. The affiliate usually coordinates the build with a paid construction team and community volunteers. In the end, the family purchases a home with a 30-year, interest-free mortgage paid to the Habitat affiliate. The monthly payments help fund future home builds.

“Traditionally, what’s built are 1,100- to 1,200-square-foot, energy-efficient homes,” Fox said. “They are built to help families maintain affordability over the long term.

“Some people think we give homes away. That’s not even close to the truth. Nothing is given. Future homeowners have to make a down payment and contribute hundreds of hours of sweat equity during construction.”

“Sweat equity” is an apt description of Fox’s time at Penn College. It took him nearly six years and plenty of long nights to earn an associate degree in business management. The Lycoming County native juggled a couple classes per semester with full-time employment at what today is known as M&T Bank.

Fox’s love of numbers and people directed him to a career in finance. A series of banking jobs confirmed his aspirations, paid for college and complemented his education. The real-world experience that instructors Dennis Williams and Ray Tyler brought to that education left an enduring impression.

I think in life that we need to be able to think less of ourselves and more about impacting another person.

“They were good businesspeople and applied that as professors. They understood not only the bookwork, but how it translates to real life, and that made sense to me,” Fox recalled. “They lived it and taught it, so it was a unique perspective that they would bring.”

When he enrolled at Penn College, Fox was fresh out of high school. By the time he graduated, he was classified as a nontraditional student. Being older led to an evolving relationship with the faculty.

“They realized I was working for a purpose – to start a career in business and finance. They saw my work ethic, integrity and job/college load and created more opportunities for dialog and real-life discussions,” he said.

The instructors stressed the importance of relationship building, a skill – combined with financial acumen – that propelled Fox up the corporate ladder following graduation. He was community office manager, responsible for asset and lending development, when he left Woodlands Bank in 2007.

The bank post is responsible for Fox’s introduction to Habitat for Humanity. He volunteered for a day with other local bankers to help construct a home. After witnessing the impact of their effort on the family in need, he wanted to do more. Not long after, Fox received a call from a Greater Lycoming Habitat for Humanity board member, asking him to become executive director. Fox said, “No.” Six months later, he was solicited again. This time, Fox said, “Yes.”

“I relate it to a redirection in my life and being reminded of the importance of my faith and seeking more of how I could impact others instead of just financially impacting me and my family. I knew it was time for a change,” he said.

During the next four years, Fox bolstered the local affiliate by expanding its territory, increasing community and volunteer support, and raising several million dollars. Five to six families each year enjoyed new homes.

“It’s neat to have an impact on a family so that they can live in a safer, more comfortable environment without worrying about being able to afford the essentials,” he said. “For some, it may be the step they need to put their children through college. Thankfulness continuously comes to mind seeing this over and over again and realizing that what we do works.”

The strong sense of gratitude made Fox’s transition to the nonprofit arena much smoother. 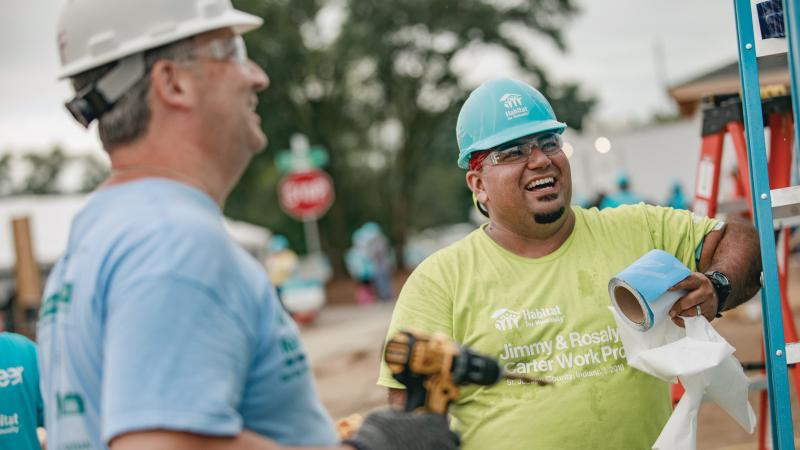 The organization is powered by volunteers. Photo courtesy of Habitat for Humanity International

“With nonprofits, you need to realize the equipment and facilities may not compare exactly to the corporate world,” he said. “You have to realize what’s important. Is it having a new laptop or using resources to serve another family? Once you make that switch mentally, there’s no going back.”

In 2011, he left the local affiliate to become a senior fiscal analyst at Habitat for Humanity International, headquartered in downtown Atlanta, about 140 miles north of the home of former President Jimmy Carter and his wife, Rosalynn, the organization’s most prominent supporters and volunteers. However, Fox didn’t have to relocate to the Peach State.

The remote position allowed him to stay in Williamsport and maintain his connection to the area, strengthened by years of volunteer work. The American Cancer Society, Kiwanis Club, Leadership Lycoming and Fox’s church are just some of the entities that have benefited from his boundless desire to serve.

As a senior fiscal analyst for Habitat, Fox ensured affiliates were being accountable, transparent and responsible in spending funds and dealing with their communities. The job was rewarding, but Fox missed direct experiences with families, like the time a woman walked into her new home’s laundry room, saw the washer and dryer, and asked, “Where do I put my quarters?” 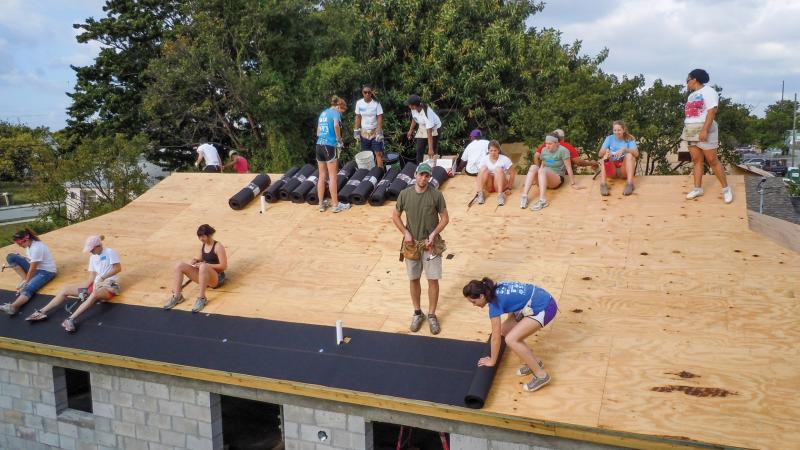 “When I heard that, I’m thinking it’s just a washer and dryer, something most of us take for granted. Experiences like that remind me that I have so much to be thankful for,” he said. “I’ve been blessed with a family (in addition to his wife, Fox has two daughters, Emily and Madison) and blessed not to have experienced poverty.”

He joined the capacity building division a few years ago for a more personal, active role in assisting affiliates with the Habitat process, from family selections to house dedications.

“I love to see affiliates in communities that are thriving, knowing that we are part of the process to help them grow,” Fox said. “Some of my affiliates might be building one home a year, and others are building 30 or 40. It’s the full range.”

Fox’s commitment to Habitat’s mission isn’t lost on his boss.

“Todd starts every day trying to help affiliates do the best they can to increase access to affordable housing to those who are underserved,” said Anna Beningo, director of the capacity building division. “Todd works to ensure that affiliates are doing their jobs the best way they can, and at times, he suggests ways in which they could improve their policies and procedures. He has their best interests at heart.”

Unfortunately, the COVID-19 pandemic has curtailed travel and the personal experiences that Fox craves. Like other Habitat team members, he’s had to rely on virtual meetings since March 2020, even though home construction builds have continued in some areas. Fox is excited to resume spending one or two weeks a month visiting affiliates when conditions permit.

“I am definitely committed to Habitat for Humanity International. This is where I am to be,” he said. “To make an impact, you need to be involved, not invisible. Impact doesn’t happen unless you’re involved in the process. I’m thankful for the opportunity to impact others.”

An impact that will endure much longer than the fading recognition on a commemorative brick. 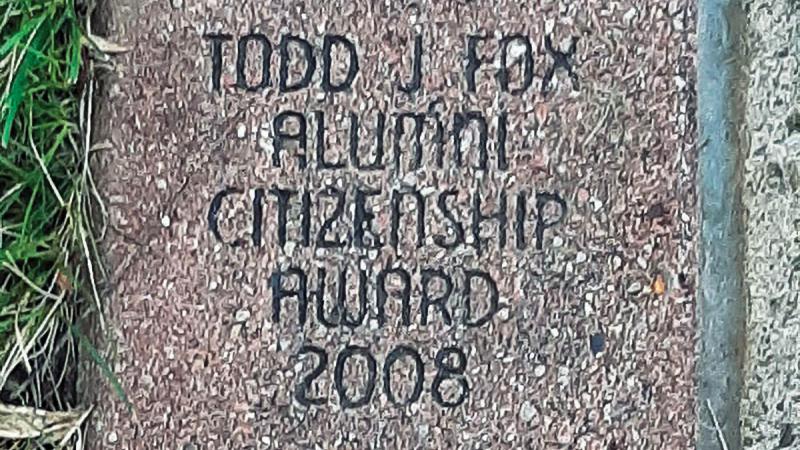 A brick along the sidewalk near Penn College's Main Entrance cements Fox's legacy as an alumni award winner.

Penn College Magazine welcomes comments that are on topic and civil. Read our full disclaimer.

We love hearing from you