Beginning in 2023, the Wildcats will play baseball and softball on a turf field complex, to be built south of campus by the Williamsport/Lycoming Chamber of Commerce.

Baseball, softball teams to have new homes in 2023

Pennsylvania College of Technology will soon have a new home for its Wildcat baseball and softball teams, thanks to a partnership with the Williamsport/Lycoming Chamber of Commerce.

The chamber, through its subsidiary Williamsport Ballpark Inc., is constructing a synthetic turf field complex adjacent to Penn College’s main campus on a 28-acre tract north of Interstate 180, between Maynard and Rose streets. Once construction is completed, the complex will feature six youth baseball/softball fields – one of which can be converted to a collegiate baseball practice field – and one collegiate baseball game field, as well as batting cages. A youth baseball field is the same size as a collegiate softball field.

Construction is underway, and Penn College is expected to play its first games at the site in Spring 2023.

“The Chamber is excited to bring this complex to the community and to have a partner like Penn College utilize it for its baseball and softball teams,” said Williamsport/Lycoming Chamber of Commerce President/CEO Jason Fink. “The challenges of playing a full spring season for those sports will be mitigated by turf fields and allow Penn College to complete a full season.” 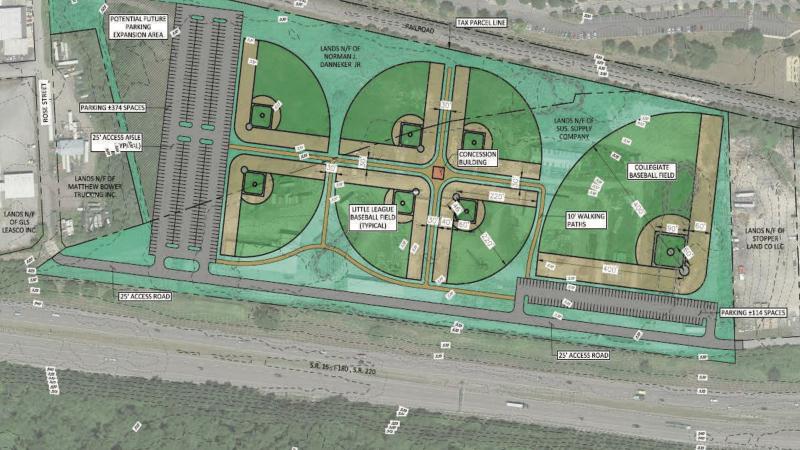 “We are delighted for this opportunity to partner with the Williamsport/Lycoming Chamber of Commerce and provide a first-class venue for our Wildcat baseball and softball teams to compete and practice,” said President Davie Jane Gilmour, who serves on the NCAA Division III Presidents Council, the highest governing body for Division III athletics. “This athletic complex will be a boon not just to the college but to the entire Greater Williamsport community, and its proximity to our main campus is a bonus for students.”

The collegiate baseball game field, which is 400 feet to center field, will feature a portable pitching mound, permanent dugouts, a scoreboard, bullpens, lights and a press box. An adjacent youth field will have the capability of moving its outfield fences to collegiate dimensions in order to be used as a practice field.

Penn College has played its home baseball games at Muncy Bank Ballpark at Historic Bowman Field and Logue Field, both of which have natural grass playing surfaces, for more than a decade, but the baseball team has never had a consistent facility where it can practice. The new turf complex will alleviate most inclement-weather postponements and give the Wildcats, who have reached the North Eastern Athletic Conference championship game three times since joining the conference in 2015, a permanent practice site.

“Having our home field literally a foul ball away from our campus is extremely exciting, and to have a complex that student-athletes can be proud of is so important to a collegiate program,” said Penn College baseball coach Chris Howard, who has 15 seasons as the Wildcats skipper. “What’s equally exciting is now our student body will be able to make the short walk from campus and watch Wildcat baseball!”

Penn College’s softball team, the 2021 NEAC champion, has played at Elm Park in Williamsport since the program began in 1993. Elm Park is a natural grass and dirt facility and is 295 feet to center field. The new complex will feature a softball field that is the collegiate standard of 220 feet to center, with lights, dugouts, bullpens,
a scoreboard and a press box.

“This facility is going to be a tremendous asset for our program,” said Penn College softball coach Angie Hunley. “This space will allow us to host many more games and practices that, during spring months, are often canceled due to rainy, wet conditions. The convenience of a location that is within walking distance for student-athletes is a game-changer!”

Editor's note: This story was corrected to reflect that the college's softball program began in 1993.

Three members of the Penn College cheerleading squad painted festive images on the office windows of the Williamsport Municipal ...

Achieving goals, on and off the field

Campus gratitude extends to the sports arena in this “Give Thanks” installment, as Wildcat student-athlete Megan A. ...

Pennsylvania College of Technology men’s and women’s basketball teams both made important strides during their last competitive ...

Penn College Magazine welcomes comments that are on topic and civil. Read our full disclaimer.

We love hearing from you